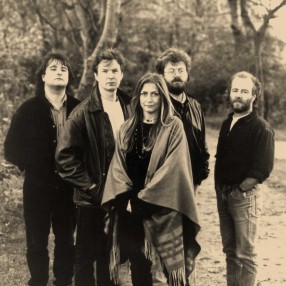 A Donegal Music Album – an insight into the music of Mairéad Ní Mhaonaigh and the vibrant Donegal Gaeltacht traditional music scene. This exhibition looks at the remarkable life in music of one of Ireland’s leading musicians through archival photographs and previously unseen family photo collections. Born and raised in the heartland of the Gaoth Dobhair Gaeltacht in Donegal, Mairéad Ni Mhaonaigh is a native Irish speaker and learned her songs and tunes from her family and neighbours. Mairéad is internationally known as one of the most important fiddle players playing in the unique Donegal style. This takes her to the world stage with her band Altan. Aside from playing with Altan, Mairéad is also renowned for her work on other projects. She can be seen presenting music programmes on both radio and television, like The Long Note, and The Pure Drop, and lately, The Full Set. Mairéad also features on recordings along with Enya, The Chieftains, Dolly Parton, The String Sisters and many others. She hopes to take time out to compose new music in the future. Irish musicianship at its finest.

This event is free 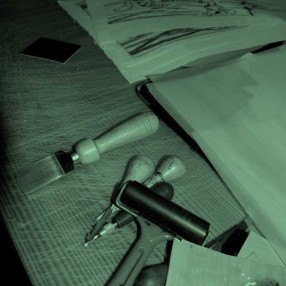 As part of Temple Bar’s annual Tradfest celebration, Graphic Studio Gallery are delighted to host Session in the Gallery with established artist Ruth O’Donnell, musician Nick Roth and sound artist Keith Lindsay, weaving together the visual abundance and musical heritage so intrinsic to Ireland’s national identity. The session is an exciting collaboration between Ruth, Nick and Keith, who will respond to each other’s work in front of a live audience.

Graphic Studio Gallery’s final event for TradFest 2015 is a ‘Drypoint Workshop’ with artists Niamh Flanagan and Clare Henderson. Over the course of an afternoon you will learn and delight in the fundamentals of drypoint printmaking and Chine Collé. Our workshops are accessible and informative, providing an environment for learning and experimentation. All equipment will be provided. 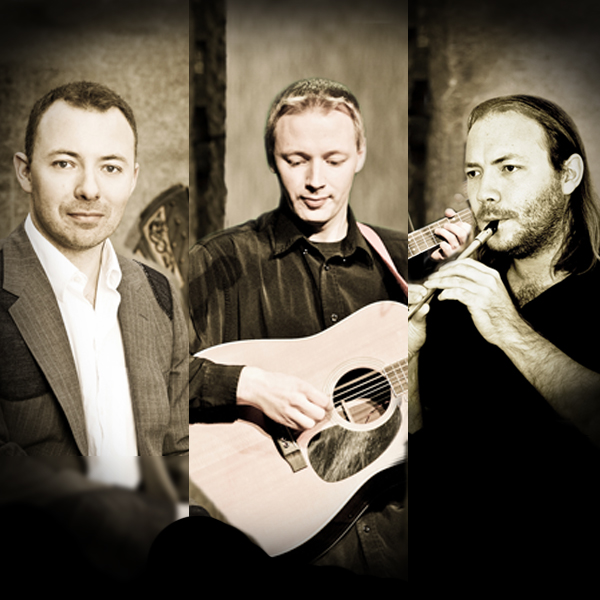 The DeBarra clan represent the third generation of performers from a family steeped in traditional music, song and the Irish language.?With roots in Co. Cork, the six De Barra brothers and their one sister were raised in Dublin and began their performing careers as children. As a group, DeBerra perform a combination of lively dance tunes and airs, original compositions, the tunes of the old harpers, and traditional songs in Irish. The instrumentation in the clan ranges from harp, whistles, flute and bodhrán to bouzouki, keys and concert piano.??Members of the DeBarra clan have performed, toured and recorded with some of Ireland’s most acclaimed bands and singers including Clannad, Slide, Dervish, Damien Dempsey, Julie Feeney, Máire Breatnach, Anne-Marie O’Farrell, Brian Kennedy, Hazel O’Connor and Moya Brennan. They first toured as a family band in Scotland and Brittany for the Celtic Festivals in Inverness and Lorient in the 1990s. For more than a decade now they have performed under the name Barcó, transfixing audiences across Europe and the U.S. True legends of the Trad scene. 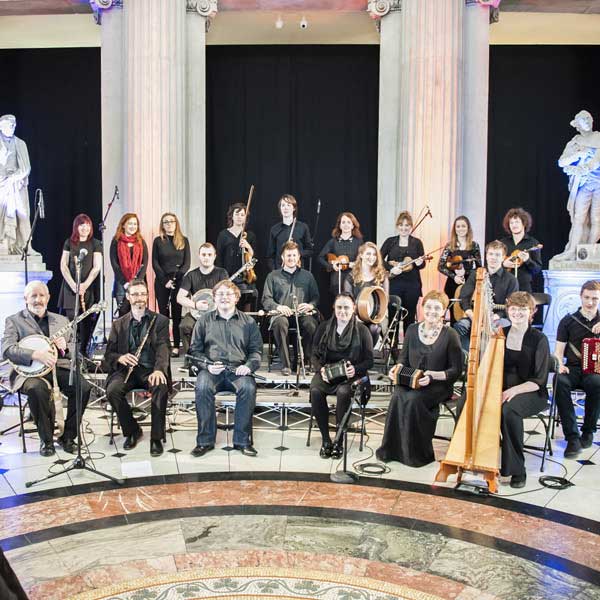 DIT Irish Traditional Music Ensemble, directed by Odhrán Ó Casaide and Kieran Hanrahan, comprises full-time undergraduate and postgraduate Conservatory students of Irish traditional music. The ensemble, which combines both instrumental and vocal music, was originally modelled on the pioneering work of Seán O Riada and Ceoltóirí Cualainn. Since its inauguration, the ensemble has forged its own unique sound and style drawing on the rich musical environment that surrounds it. The ensemble is fortunate in that it features some of the finest young musical talent in Ireland today. This talent is nurtured and developed in an innovative and challenging way, resulting in musical performances and recordings which are at the forefront of the musical tradition today. DIT Irish Traditional Music Ensemble will be joined on stage by The DIT Early Music Ensemble, co-ordinated by Loaise O’Brien, DIT Early Music Ensemble who performs on modern instruments as well as on period instruments such as recorder, baroque violin, gamba, baroque guitar, archlute, harpsichord and fortepiano.

Since the release of their last CD, “Into Your Heart” Hothouse Flowers have been playing steadily around Ireland, America, Great Britain, Japan and Europe. Known for their unique brand of rock that’s influenced by soul, gospel and traditional music, their shows last between two and three hours depending on the level of fever in the room. There is an unpredictable energy in the band that harkens back to the “Risk” days. Hothouse Flowers mine their deep repertoire to create a show that is unique to the time and place. No two shows are the same. Improvisation can come at any point and allow the men express their brightest and their darkest influences. “Rock and Roll is not about safety or politeness, it is not about perfection either. It is expression and it is spirit.” Humour is also never far from a Hothouse Flowers night. They do not take themselves seriously however there is no mistaking the musical integrity among them as they open up to each other in musical dialogue. This is a band that started out busking – they played the streets and brought the streets to the stages of the world. 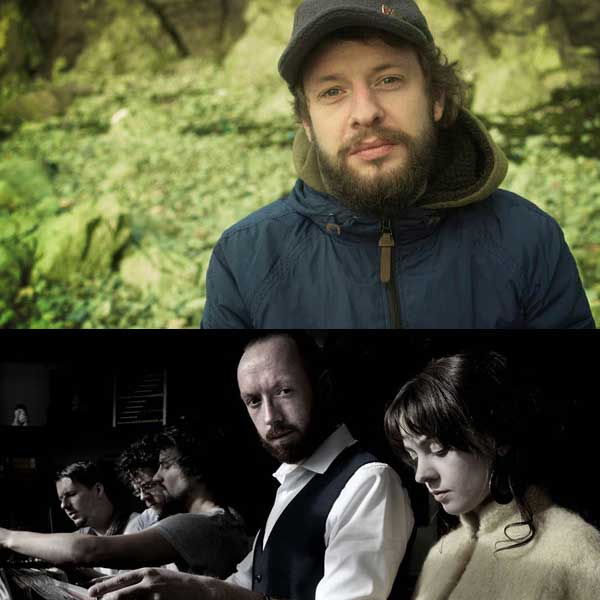 Following the release of his critically acclaimed debut album ‘My Friend Marx’ in 2011, Marc O’Reilly has established himself as one of the most exciting artists within the folk/blues genre gaining comparisons with artists such as John Martyn and Bon Iver. 2013 saw Marc tour all over Europe including appearances at major festivals like Glastonbury, Electric Picnic and Boardmasters and squeezing in a trip to the US to appear at the Live in the Vineyard Festival in Napa, California. ‘Human Herdings’, a new collection of songs has met with universal acclaim since its release in March. This is a troubadour at the very height of his powers

The Hard Ground are Marlene Enright, Pat Carey, Dave Duffy,
Davy Ryan and Hugh Dillon. Musically brooding and brash, sassy and sentimental, where the gravel meets the glass. Alternating between contrasting styles, sometimes raw, sometimes layered, the five piece always pack an emotional punch. The band recorded, produced and released their first album, Broken Conversations, in 2012, then spent most of 2013 touring Ireland and the UK, where they cultivated great reviews and a following at home and abroad. They have recently finished the recordings for their second album…Expect the unexpected! 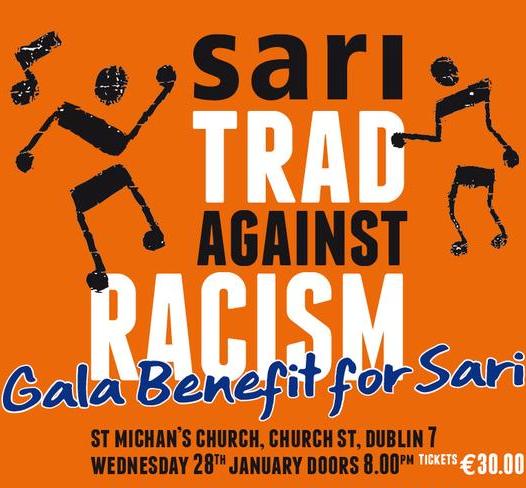 SARI is a not for profit organisation. Its aim is to present sporting and cultural events that brings people together from different cultural backgrounds. It creates opportunities for young people to participate in social integration projects at home and abroad. SARI also promotes intercultural dialogue and celebrate cultural diversity through projects in schools and to encourage government agencies and national sports bodies to adopt anti-racism measures and inclusion of policies and practices.