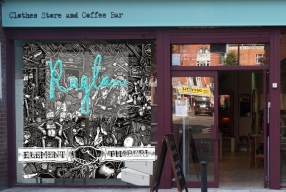 RAGLAN - A new concept Clothes Store and Coffee Bar Opens in the City Centre Drury Street, long known for its heritage in the rag trade has had somewhat of a rebirth in recent years, and autumn 2015 will see the latest occupant return to its roots. Introducing Raglan -an independent, urban and lifestyle retailer which opened its doors in August 2014, bringing a unique and laid back shopping solution to Dublin. Located on 56-58 Drury Street, the store offers the perfection fusion of coffee and clothing, with a fresh bohemian urban twist. Brands like; RVCA, Element, VonZipper, WEsC, Nixon, Billabong and Dakine have been hand selected from around the world delivering a laid back edgy street/skate vibe for both men and women.

To celebrate the opening of a new lifestyle concept store Raglan, in connection with Element and TIMBER

Timber will be making a 2 meter live art piece at the opening! Come and celebrate with us the launch of the Fall 2014 Element Timber capsule collection.

??Pop in for a beer, coffee, shop and hang out and watch a live painting by Chad Eaton AKA Timber.

ABOUT CHAD EATON aka TIMBER! –

In early 2006, artist and six year screen printer, Chad Eaton, drew a lumberjack line drawing and printed it on a few t-shirts for his own amusement. Friends began asking for them. Friends of friends began asking for them, and before
he knew it, he was listing them online for sale. This became the perfect outlet for Chad’s drawings, and to Chad’s surprise, has continued to grow year after year.

Chad Eaton also known as Timber! is an artist based in Los Angeles, California. He is an Element Advocate and has been involved in Element collaborations since 2006.

The last Stop for Timber on his European tour after, Paris, Milan, Lyon and Belgium

Let's bond and celebrate together! 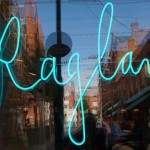