JEST by Anne Hendrick will open at Talbot Gallery and Studios on Thursday 16th October 2014 and run until Saturday 8th November 2014. 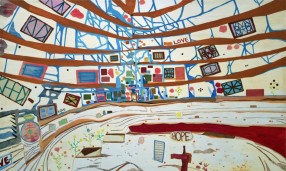 The physicality of the paintings explores flattened perspectives and weird dimensions as they are produced, slowly and meditatively. The paintings seduce with silky and textured surfaces in an attempt to produce images that could possibly transcend their object hood. Layer upon layer of paint is built up, sometimes to disguise alleged mistake after mistake or restlessness in production which then imbues the work with a specific kind of archaeological depth. The uneasiness between the physicality of the paintings and the scenes depicted represents fluid realities. A somewhat opimistic exterior belies the broader concerns of the paintings.

Anne Hendrick (b.1983, Wexford) has a BFA in Painting and History of Art from NCAD where she graduated in 2006. Since graduating, Anne has exhibited extensively throughout Ireland as well as the UK, Iceland and Barcelona. She is a co-founder of the artist collective Scissors Cuts Paper who began working collaboratively in 2006. In 2012 she completed an artists’ residency programme with The Association of Icelandic Visual Artists in Reykjavik. Her fifth solo show Hokum opened in 2012.

Anne works primarily in the medium of painting; she is also currently working with video and installation.