The second annual Dublin Festival of History will run from 26th September to 8th October 2014.

Dublin’s involvement in the First World War will be one of the main themes of the 2014 Dublin Festival of History, giving everyone with an interest in history the chance to discuss historical events with professional historians.

The main history talks will take place at The Printworks Venue, Dublin Castle, between Friday 26th and Sunday 28th September. Expert speaker will explore Viking Dublin, Spain in the 20th century, the Warsaw Uprising, women in war, and the Kremlin in history, while a Poetry Aloud session will bring poems of the Great War to the stage. History events including films, talks, and workshops continue at Dublin City Branch Libraries and other venues until 8th October 2014. Dublin City Public Libraries & Archive works to preserve, share and promote the record of Dublin and Irish heritage and enable historical research. The Dublin Festival of History, inaugurated in 2013, is part of the City Council’s commitment to building awareness of the Library and Archive as the memory of the City and encouraging interest in the history of Dublin and beyond.

Speaking at the announcement of the programme, Dublin City Librarian Margaret Hayes explained:

"4,000 people attended last year’s Festival showing how important history is to Dubliners and visitors alike. The Festival allows Dublin City Council to mark significant historical anniversaries and this year, Dublin’s involvement in the First World War will be remembered. As well as talks by historians there will be a specially commissioned piece of theatre, narrated by actor Bryan Murray, which will bring the war experiences of ordinary Dubliners to life. There will also be a new exhibition of First World War prints at Dublin City Gallery The Hugh Lane, and many more events.
The programme will feature renowned historians from abroad, including Alison Weir, Hew Strachan, Richard Evans, and Charles Spencer, as well as Irish historians such as Mary Daly, David Dickson and Sean Duffy."

For more information on the festival and a complete list of events visit Dublin Festival of History's Official Website.

You may also want to read... 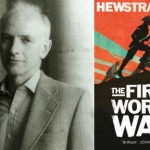