A 200-seater theatre that is drenched in history, the Smock Alley Theatre dates back to 1662. Its architectual and historical importance should not overshadow its comtemporay place in Dublin’s theatre landscape, however. A raw interior backdrops some excellent ventures in suspension of disbelief and the space is at its best during the Fringe Festival. Wedged between two churches, Smock Alley is a Gothic shell for modern entertainment.

In 1989, the church was deconsecrated due to falling numbers of parishioners. It was then redeveloped into the ‘Viking Adventure,’ as part of the Temple Bar rejuvenation scheme, closing down in 2002. After a six-year renovation, Smock Alley Theatre reopened its doors as Dublin’s oldest newest theatre in May 2012. With three gorgeous venues, Smock Alley is the perfect place to spend a cultural evening out.

For more than a century, Smock Alley put Irish theatre on the European map, acting as the very core of an Ireland striving to find its own voice. If we are to ask historically what makes theatre such an important part of culture today, we would need to go back more than two centuries before the founding of The Abbey Theatre, to the Smock Alley Theatre of the 17th century. 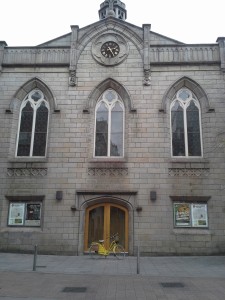