Written by Niall Houlihan on September 21, 2015. Posted in Activities Family

This year the victorious Dublin team showed off the Sam Maguire with the backdrop of O’Connell Street instead of Merrion Square much to the delight of Dublin fans. We look back at famous Irish sport homecomings of the past where O’Connell Street has welcomed our sporting heroes.

The Clones Cyclone inspired the 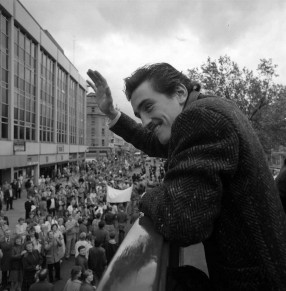 Irish people in the 1980’s
on his journey to capturing the World Featherweight Title against the long time champion Eusebio Pedroza. 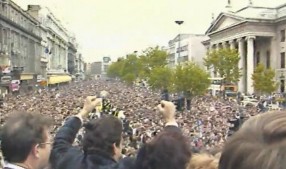 It was one of three homecomings for McGuigan who had 75,000 turn out in Belfast to greet him then the population of his hometown Clones turned out to greet the new champion. The Dublin homecoming saw over 100,000 people flocked to O’Connell Street to show how much winning the World Title meant to the Irish people. 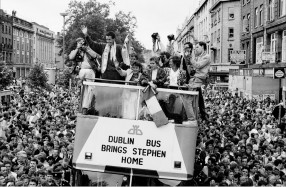 Street to welcome home The Tour De France Champion in 1987. As a small nation Roche’s phenomenal achievement will always go down as one of the biggest by an Irish athlete.

This gigantic victory for such a small country saw jubilant supporters gather on O’Connell Street to greet our champion.

‘A Nation holds it’s breath’ the famous words before David O’Leary netted that famous penalty against Romania. Big Jack Charlton was overwhelmed by the welcome home his Irish team received on O’Connell Street. Hundreds of thousands turned out to show their support to the boys in green as they traveled through O’Connell Street up to College Green given the vast amount of people.